My name is Sharon Heinrich, and I’m a 44-year-old pastry chef living in Paris for the past decade, where I research and explore the rich (and delicious) world of pastries and chocolate. Growing up in Haifa, I studied at the Alliance School, where we had to learn French. From the very first lesson, I fell in love with the language, and later with the culture, too. France—and Paris, in particular—and I, it turns out, were meant to be. Shortly thereafter, baking became a part of my life as well, and at every job I held, I would treat my colleagues to the cakes and desserts I whipped up in my free time. Some time later, I turned my love for pastries into a profession, completing a pastry course at Estella – Master Class in Pastry and participating in several certifications and workshops in Israel and at Le Cordon Bleu in Paris. I worked in the industry for several years, including at Shemo with my friend Pastry Chef Miki Shemo. Our relationship came full circle when he created French pastry recipes for my book, The Best Patisseries in Paris: A Guide to Cake and Sweet Shops, which was published in 2014. Of course, it was only natural for my two great loves—for Paris and for sweets—to come together at some point. Some years ago, after two academic degrees and many years of working at the Prime Minister’s Office in Israel, I decided to follow a personal dream and move to Paris. That’s when I created my Hebrew-language blog, Paris Chez Sharon, which is dedicated to Paris, pastry, and everything in between. The blog gave me a chance to research Paris’ patisseries, chocolateries, and boulangeries; to meet the world’s best pastry chefs and chocolatiers; to participate in workshops; to discover hidden gems in the culinary world; and, best of all, to meet eager readers, gastronomes, and culinary leaders from around the world.

Paris, With One Suitcase

About 10 years ago, I arrived in Paris alone, with just one suitcase and lots of dreams. Today I’m married to Gali, whom I met on a pastry tour…which turned into the longest tour of our lives. Together we make dreams—both our own and those of other people—come true and savor the sweet life in the City of Lights. 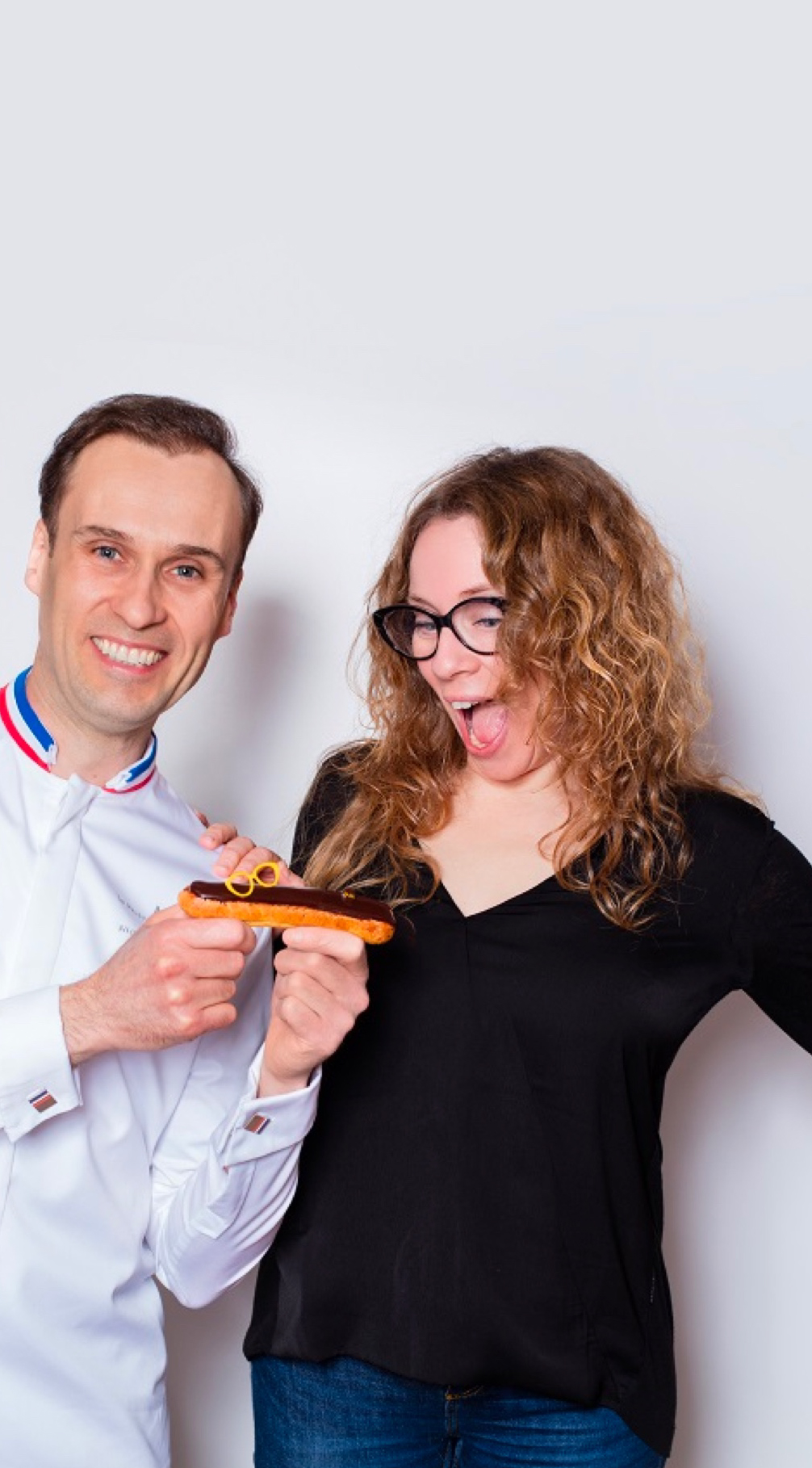 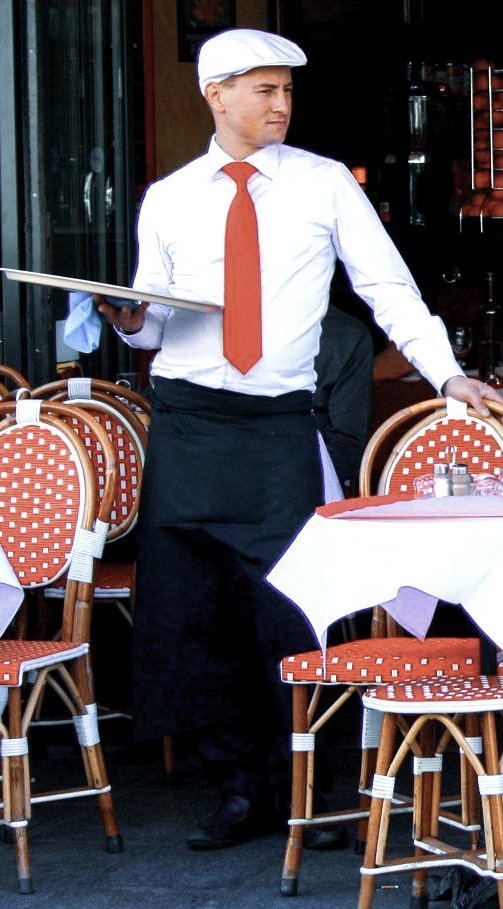 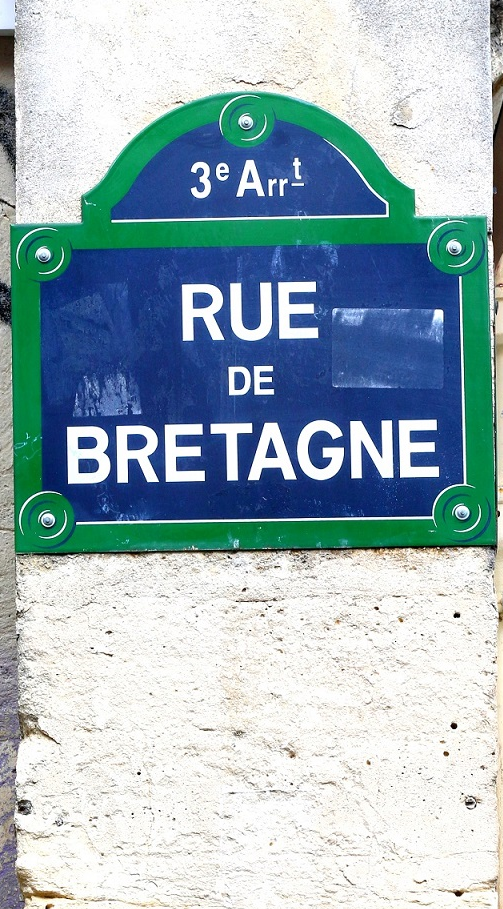 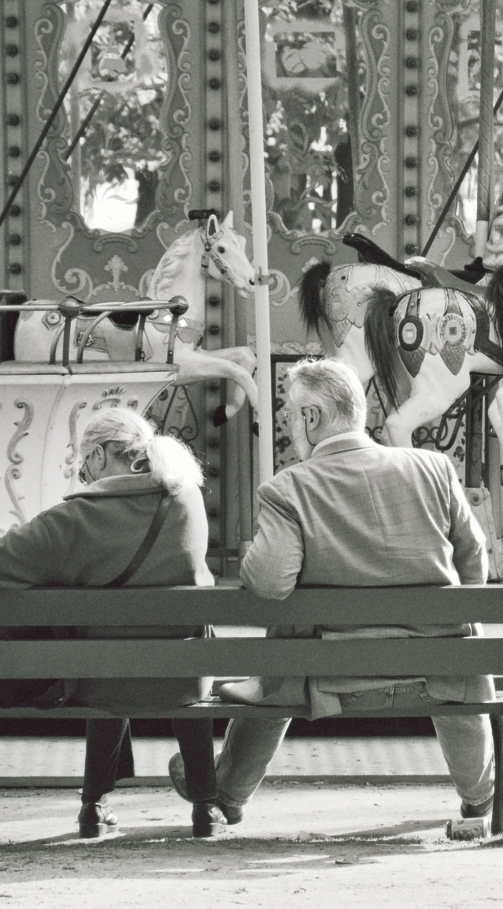 There’s a reason UNESCO declared French cuisine a “world intangible heritage.” As the capital of France, Paris attracts the best chefs, pastry chefs, and chocolatiers, and they put their own modern spin on classical French pastry. Paris is where centuries-old tradition and contemporary trends come together to create the sweetest surprises. In the last few years, a new generation of chic, modern sweet shops has joined the veteran pastry institutions. Just like the greatest fashion designers, the pastry chefs behind them create new collections based on the seasons, the ingredients available to them, and certain topics or themes. Traditional pastries are reinterpreted, and the shapes, colors, and flavors are updated constantly, a reflection of global trends and styles. The City of Light is full of exquisite pastry shops, excellent bakeries, and top-notch chocolate shops. Ask locals where to find the best baguette, and you’re sure to get as many answers as the number of people you asked. Over the past few years, I’ve been thrilled to have the chance to share the knowledge that I’ve gathered from others through my book, The Best Patisseries in Paris: A Guide to Cake and Sweet Shops, the first Hebrew-language guide to Paris’ pastry shops, as well as through the tours that I lead with Gali, my wife and colleague, of patisseries and chocolateries, tearooms and delicatessens. With these tours, I’m able to introduce visitors to a whole culture, which includes within it fascinating stories about the history of France in general and Paris in particular. It’s not unusual for us to hear from readers and visitors that the stories we told them about French sweets connect them to another angle of Paris they previously knew. By way of this blog, I invite you to join me on a tour of Paris’ best pastry and chocolate shops and the stories behind them for a journey that will, I’m sure, shed a sparkling new light on the City of Light. 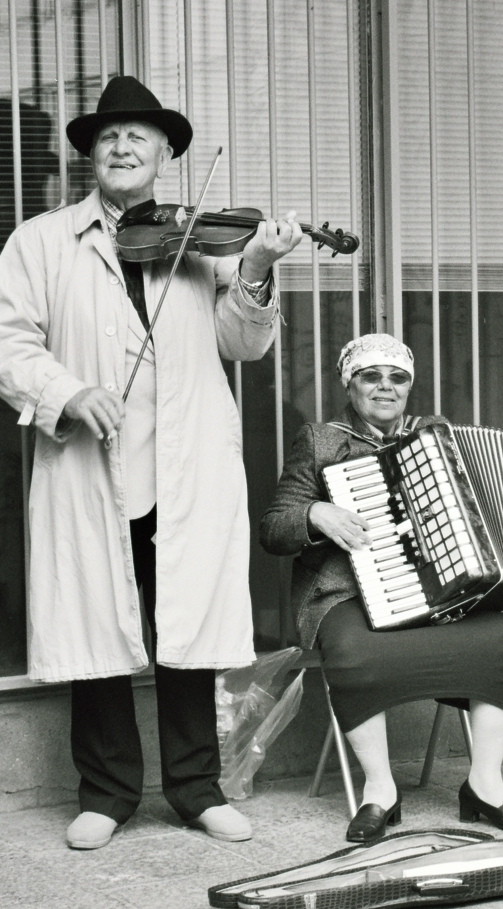 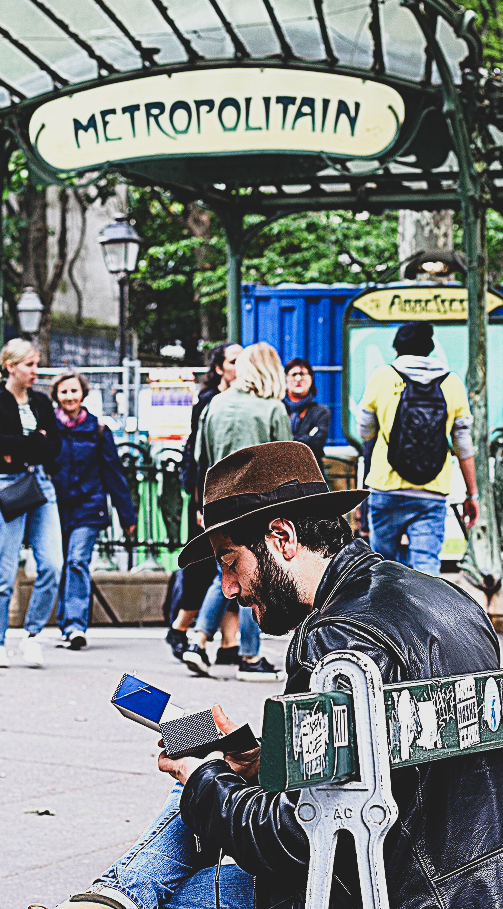 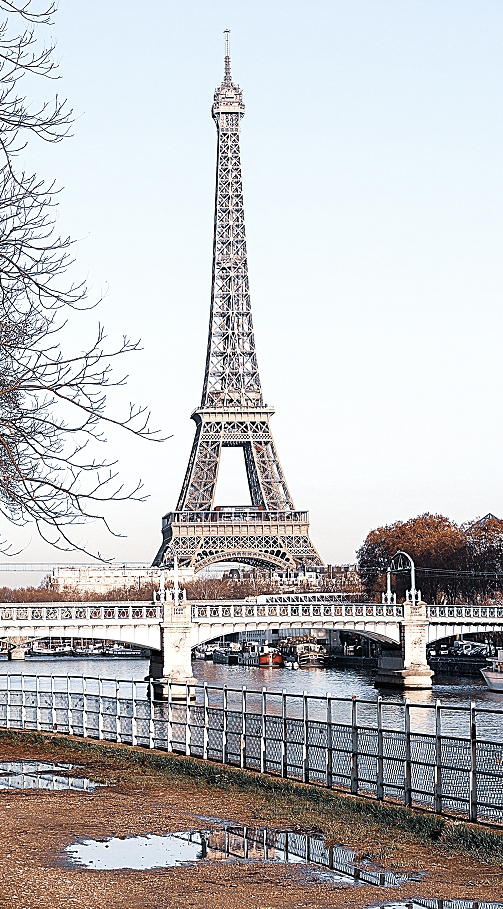 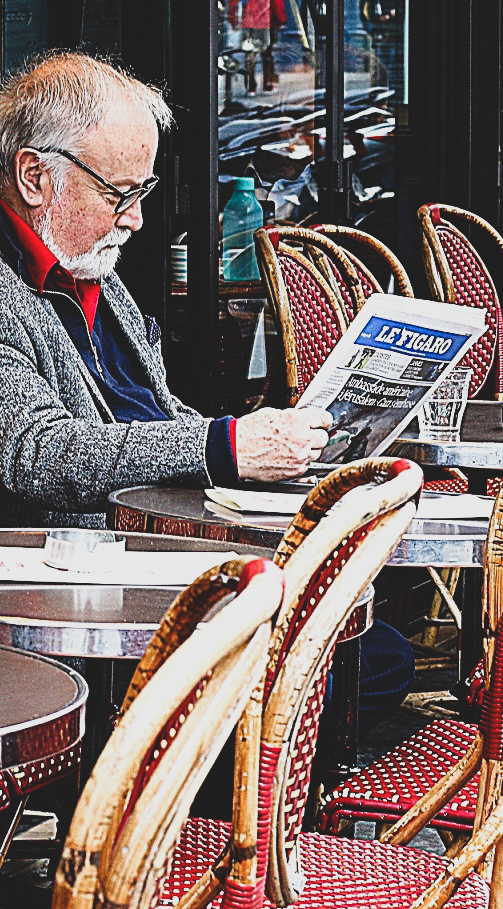 Here’s where you’ll find all our recipes

The Best Patisseries in Paris

A Guide to Cake and Sweet Shops.The book that will take you to the heart of the secrets of Parisian pastries.

Start dreaming, and let us make it happen

Paris is the most visited city in the world. Every year, some 30 million tourists visit, wandering its streets, going to its famous sites, and taking advantage of its abundance of cultural, historical, and culinary attractions. Usually they turn to one of the many guidebooks written about the city, travel with a group led by a guide, or plan their trip based on research from a variety of online sources. There’s no doubt that every trip offers visitors incredible and unforgettable experiences. If you plan on visiting the world’s most vibrant and wonderful city, allow me to invite you to experience it in a different and particularly sweet way. As a trained pastry chef and culinary researcher with a focus on Parisian pastries and chocolate, this domain is my home and my playground. With so many options in Paris, how do you know which shop to stop in or where to find the best macarons or croissants? Where can you taste Paris’ best mille-feuille or sip the coziest chocolat chaud (hot chocolate)? Where should you go to find the chocolate bonbons that don’t just look like gems, but also taste magnificent?

THE TASTE OF PARIS

We invite you to embark upon a sweet journey through Paris’ best pastry and chocolate shops and the stories behind them, a journey that will shed a bright new light on the City of Light.

What They Say About Us

Dear Sharon! I wanted to thank you on my behalf and on behalf of Eva and Ronit for a tour full of knowledge, taste and humor! The charm of a woman, full of knowledge and being able to convey to us in 4 hours the French charm and taste, was fun! And next time in Paris I will come to you again.

Dear Gali. “Officially” we joined a culinary tour yesterday, but thanks to you, it was way beyond that. From the first moment you captivated us with your personality and exceptional knowledge. It began with the personal story and the courageous decision, not to give up and realize the big dream. The shared experience was undoubtedly one of the highlights of our visit and left us a taste of more! On a personal level, I am full of appreciation for both Drive and Sharon's successful entrepreneurship, wishing you much success in this charming venture and many days of happiness!

Dear Sharon, I want to tell you how significant my meeting with you was. When we met, I knew through you some wonderful tastes and fascinating stories. But mostly I met a young woman, who packed a suitcase one day and flew to Paris with a lot of courage to realize her dream. And the world around her, just like the world's way of dreaming, just got along and fulfilled her dreams she didn't even dare to imagine.

The lecture today excited me. When you talked about your way and all the thoughts, I felt that you took my words out of my mouth. You really inspired me, I adore you for the way you did and I wish I have the courage like yours to go after my dream. I wanted to say thank you for sharing your story.

My inspiration. I dream of living in France

“We stayed in touch after the tour and opened up to each other about food, love, and relationships. Four months later, Gali came back to Paris, and we’ve been together ever since. For a while we went back and forth between Paris and Tel Aviv. Eventually Gali left Tel Aviv to join me in the sweet little Parisian apartment we made our home. We call it ‘our Parisian cottage’—it’s a cute, tiny apartment with real wooden floorboards that creak. The kitchen is the most amusing part. With a couple as culinary-minded as we are, you’d expect the kitchen to be the size of the apartment. But in Paris, apartments barely have kitchens, especially apartments as small as ours. Our kitchen is two meters wide with a minibar for a refrigerator and almost no cabinets for storage. But I believe that if you love to cook or bake, you’ll make it happen even in the tiniest of kitchens. We cook, bake, and host the city’s pastry chefs for Israeli meals.”
– Excerpt from “Sweet in Paris” by Maya Darin in Israel Hayom

Link to the recipe is in my bio! Please welcome th

Link to the recipe is in my bio! Chocolate Covered

Link to the recipe is in my bio! There’s no week